The Power of Nutrition (Part 3): The Blue Zones – Living a longer and healthier life

The so-called Blue Zones are regions of the world where people live much longer and healthier than average. They suffer from only a fraction of the diseases that are putting a great burden on people in other parts of the developed world 1). To date, five geographic areas have been identified where people live statistically the longest:

1. The Okinawa Islands, Japan: Okinawans have less cancer, heart disease, and dementia than Americans, and women live longer than any other women on the planet. There are also fewer infectious diseases in the older generation 2) 3).

2. Loma Linda, California: Researchers investigated a group of Seventh-day Adventists who are among the longest-living people in North America 4).

3. Sardinia, Italy (especially Ogliastra, Barbagia of Ollolai and Barbagia of Seulo): In the mountain villages of Sardinia, a considerable proportion of men reach the age of 100, especially in a village called Seulo, which holds the record of 20 centenarians from 1996 to 2016 5).

4. Nicoya Peninsula, Costa Rica: Researchers found that the probability of becoming a centenarian for a 60-year-old man residing in Nicoya is 4.8%, which was even more than double that of Okinawa, the second highest in the comparison, and it was almost seven times that of Sardinia and Japan 6). A research team is currently researching the relationships between the lifestyle and the advanced age of the inhabitants.

5. Ikaria, Greece: The inhabitants of this Greek island have a strong probability of living past the age of 90.. In fact, the so-called Ikaria study, performed in 2009, showed that 1.6% of the men and 1.1% of the women participants were over that age. Also, according to that study, the average scores for depressive symptoms were low, and even lower than for other Greek population groups 7).

Based on empirical data and first-hand observations, there are a number of possible explanations why these populations live healthier and longer lives. Above all, nutrition, lifestyle factors, and social structures seem to have a major impact on health.

But what exactly is it about their diet that might contribute to their healthy aging?
Let’s have a closer look!

Diet Habits of People Living in the Blue Zones

Okinawa, Japan
In Okinawa, the “island of the centenarians” in the south of Japan, the following factors were identified by researchers:
The traditional diet of Okinawans is essentially plant-based, generally low in energy, fat and sodium and relatively low in protein, but rich in micronutrients and complex carbohydrates. Almost 60% of the energy is supplied by vegetables, especially by high consumption of sweet potatoes (containing carotenoids, phytochemicals, antioxidants) and a high consumption of green leafy vegetables and other vegetables. One principle in Okinawa is to eat only until you are 80% full 8). This means that the residents do not starve but eat meals with low energy density, which is known as calorie restriction and is believed to slow down the aging process and increase longevity. It also might prevent obesity and nutrition-related illnesses in Okinawa 9)10)11). A high intake of antioxidants combined with calorie restriction (reduced energy intake) is supposed to reduce the number of free radicals in the blood 12)13). Further, Okinawans traditionally consume medicinal herbs and many spices, like turmeric, ginger, and mugwort as part of their diet.

Loma Linda, California, USA
Another Blue Zone is Loma Linda in California. The Seventh-day Adventists, a church community living there, have one of the highest life expectancies worldwide. This community is known for presenting a health message that advocates vegetarianism and discourages its members from consuming alcoholic beverages, tobacco or other drugs. In addition, some Adventists avoid beverages that contain caffeine. This gave rise to a large study set on the Seventh-day Adventists, the Adventist Health Study I and II.
Through these studies, the following factors that the Seventh-day Adventists are following have been identified as life-prolonging: a vegetarian diet, regular consumption of nuts, avoidance of obesity, exercise and non-smoking 14).
Taking a closer look into nutrition, it was found that lacto-ovo vegetarians and vegans in the Adventist Health Study had a significantly reduced risk of all-cause mortality in both genders 15) and vegan or vegetarian men had a reduced mortality rate for cardiovascular disease 16)17).
Blood pressure and the risk of high blood pressure are also significantly lower among vegans than non-vegetarian Adventists 18)19).
Vegans also show a 60% reduction in the risk of type 2 diabetes mellitus 20)21) and approximately 16% lower cancer risk than non-vegetarians 22). Inflammation markers (C-reactive protein) were found lower in vegetarians than in mixed dieters 23) and vegan men have approximately 35% lower prostate cancer risk 24).
Adventists, just like the Japanese, Chinese, and Okinawa residents, eat relatively more soy products 25), which could possibly be a reason for the low risk of breast and prostate cancer and cardiovascular disease of these populations due to the presence of isoflavones 26).

Sardinia, Italy
In Sardinia, especially in its mountain villages, a considerable proportion of the population lives beyond the age of 80. A largely plant-based diet, daily physical activity (traditionally many men are sheep herders) and familial closeness might have given this Blue Zone the highest concentration of male centenarians in the world. Even nowadays a large proportion of the population in this area still follows the traditional diet based on cereal-derived foods and dairy products 27). Older adults from this Blue Zone also self-report low depressive symptoms and high psychological well-being, which are largely attributed to trait resilience and strong social ties 28).

Nicoya Peninsula, Costa Rica
The Nicoya Peninsula in Costa Rica might have the lowest intake of processed food. Nicoyans traditionally get the majority of their caloric intake from beans, rice, squash, corn, and tropical fruits. This leads to a plant-based and nutrient-dense diet with a low glycemic index and high fiber content that may contribute to their advanced age and many years spent in good health. Nicoyans spend most of their time outdoors, and their spiritual practice seems to promote a mental health to age 90 and beyond. Nicoyans have lower levels of biomarkers of cardiovascular risk, and, especially for men, the increase in life expectancy comes from lower cardiovascular mortality. They are also leaner, taller and suffer fewer disabilities. Telomere length and dehydroepiandrosterone sulphate, which are markers of aging and stress, were found to be more favorable 29).

Ikaria, Greece
The percentage of people over the age of 90 is much higher than the European population average. The majority of the oldest participants report healthy eating habits, daily physical activities avoidance of smoking, frequent socializing, daily naps, and low rates of depression and dementia. The vast majority of the island’s population follows a traditional way of living, and their traditional dietary habits include mainly plant foods and adherence to the Mediterranean diet, including lots of fruits, vegetables, beans, whole grains, potatoes and olive oil. It seems that westernization and modern food traditions have not affected the lifelong habits of Ikaria people 30).

Is There a “Blue Zones Diet”?

Findings from the Blue Zones suggest that the interaction of environmental, behavioral, along with clinical characteristics may determine their longevity. However, one of the factors that might be the most promising and easiest to influence is diet.

If you look at the diet habits of people living in the Blue Zones, a few basic principles can be derived that might be reasonable and possible to follow.

To begin with, the most prominent feature of all eating habits found in the Blue Zones is a diet based on plants. Blue Zone inhabitants commonly eat a large variety of seasonal and/or fermented vegetables and fruits, whole grains and legumes. Fat and oils, especially olive oil, are sourced mostly from plants.
Another important feature is that most food consumed is completely unprocessed, which means that almost nothing is taken from or added to the single ingredient. One example is the use of whole grains that are used to make sourdough bread.
Meat is eaten in four of the five Blue Zones, but the average amount consumed is less than 60 grams five times per month 31).
Fish is also eaten in small quantities, up to three portions a week. If people from the Blue Zones consume dairy, it’s mostly sheep or goat’s milk in a fermented form.

To summarize: A diet rich in whole plant foods with little to no animal products might be the best option to support a healthy and long life. People living in the Blue Zones show how it can be done! 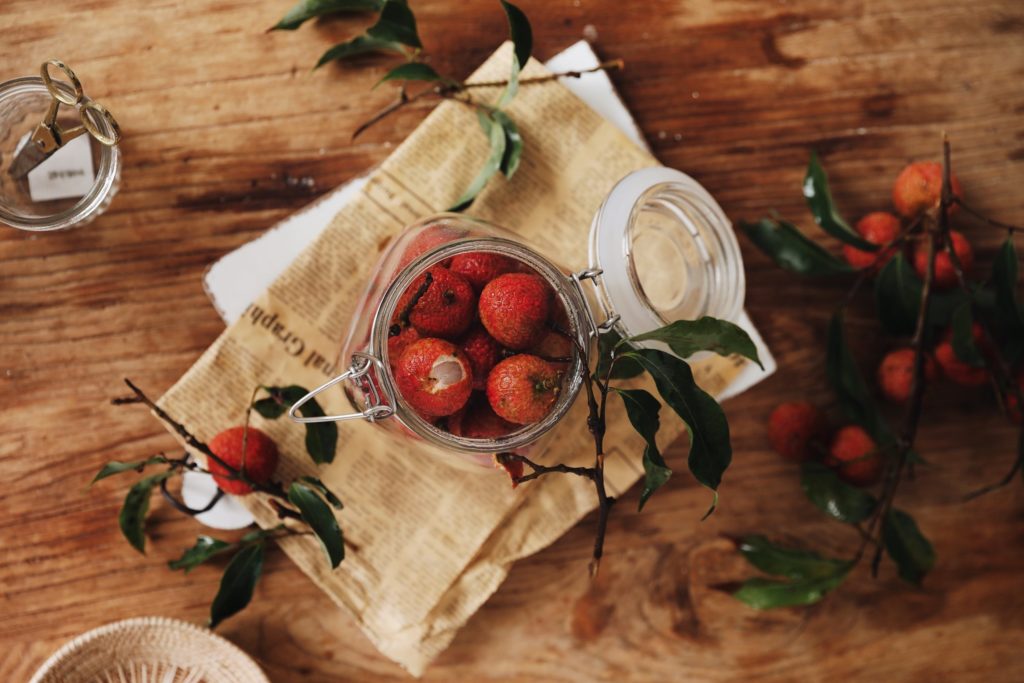